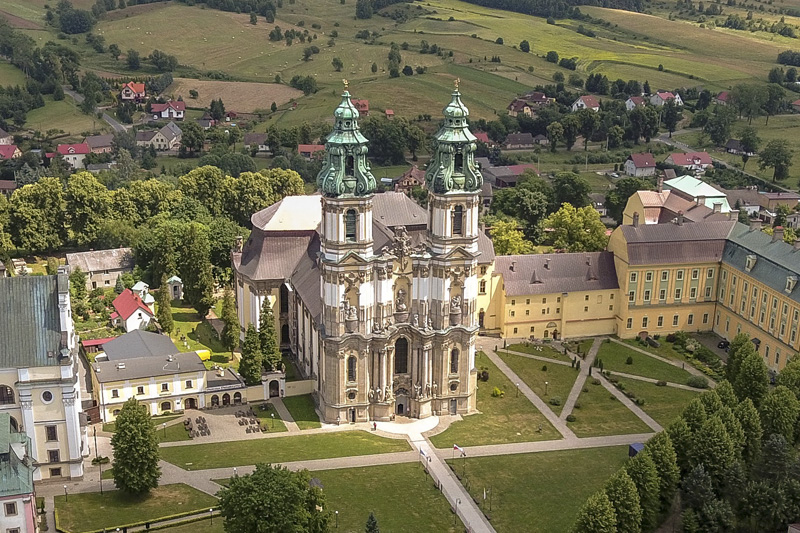 The monastic church in Krzeszów is one of the biggest and most beautiful baroque temples not only in Silesia and Poland but in the whole Europe. Its form dominates the scenery from far away, showing  the way to the pilgrims and tourists.

The church was set on a cross plan with lengthened and pointing east presbytery and Mausoleum of Piasts placed behind it. From the west, above the monastery’s churchyard, a two-towered façade dominates. Ideological meaning of the church is entirely subordinated to the train of Emanuel – The saviour of the World and Mary. Already in the vestibule one can find rich decorations in form of wall paintings. The actual interior surprises on one hand with the huge scale (church’s interior is 80m long, on the outside including mausoleum and chapels – 118m, the width of nave interior is 29m, the highest point of vault is 25,7m). On the other hand, typical for the biggest baroque works, the impression of integration of all sorts of arts (architecture, sculpture, painting and complementing it musical arrangement – choir and orchestra – theatrum sacrum) into one composition. On the naves’ crossing illusionistic dome is painted. Extremely rich baroque equipment made for the new church was complemented with valuable religious
tokens, much older than the church itself: wonderful picture of Mary in the presbytery and a statue of Christ
Emmanuel and a crucifix from Wierzbna in the arms of transept.

The most important piece of equipment is the main altar (1748-1758). Above the stand alone altar stone and tabernacle is a wonderful silver framed picture of Mary with Baby Jesus – an icon in characteristic for eastern church type of Mary Hodegretti (the Guide – like the Black Madonna of Częstochowa) The drawing of clothes in characteristic Byzantine style allows us to date it as far as the 13th century. In the centre of the altarpiece is a painting of The Assumption of Mary by Peter Brandl, which is surrounded by allegories of angel choirs. Below, on the sides above portals leading to Piasts Mausoleum, are allegorical statues of Love (on the right) and Hope (on the left).

Western matroneum is filled with organ, designed by Michael Engler Junior, built in 1732-1737. The sculptor’s decoration depicts the scene of worshipping of Baby Jesus by Mary and Joseph and orchestra of angels.

The abbey, established by dukes of Swidnica-Jawor, was to become the necropolis of the dynasty. Originally the founders rested in a crypt below the presbytery of the medieval church, and probably three of them had tombstones inside the church, Bolko I and II in front of the main altar, and Bernard Stateczny between the stalls. It is similar to the way other dukes were buried in monasteries established by themselves, including cistercian in Lubiąż and Trzebnica. The tombstones of the other members of the family were placed behind the main altar, in chapels. The new mausoleum came into being together witch the church, in 1735. Ignacy Albrecht Provisore finished the stucco decoration and a year later Georg Wilhelm Neunhertz finished the fresco decoration, the works, however, continued until 1747. The interior consists of two chapels connected with an arcade. Both chapels are topped with domes in the centre.

In the northern chapel finds itself the tombstone of Duke Bolko I the Raw. His tomb is covered with a medieval tombstone, dated as far back as the early 14th century. It shows us the figure of duke lying in armour, with his insignia. In the southern chapel stands a statue of Bolko II the Small, from the second half of the 14th century. It is partly complemented with a baroque tomb. Here, as well, the duke is presented in an armour, with his insignia. On the side of the tomb medieval figures survived. They depict mourners, representing three classes: burgesses, clergy and knighthood.

Below the window of the southern wall is a tombstone from about 1620 of Władysław Zedlitz – another benefactor of the monastery.

The temple is located inside the abbey in Krzeszów, to the north-west of the monastic church. At first, the building works were led by a bricklayer master working for the abbey – Martin Urban according to anonymous plans. But after the collapse of both towers planned in the façade, the building was continued
by Michael Klein from Nysa. The church was founded by abbot Bernard Rosa – resourceful administrator, author of prayer books and theological magazines and an arts patron, but also one of the most important representatives of counterreformation in Silesia, propagating the cult of Saint Joseph as the source of revival of Catholicism. In 1669, in Krzeszów, he established a brotherhood of Saint Joseph, gathering the laity and clergy elites and a wide throng of representatives of all social classes (about 100 000 members in the late 17th century).

façade, finally with no towers, is decorated with statues of the Holy Family from 1667.

The series of frescoes on the walls and barrel vaults – ones of the most important for those times in Europe – were made by the greatest Silesian painter of the 17th century – Michael Leopold Willmann with his son Michael, and his stepson, John Christoph Liszka, patterning themselves upon the presentations of Saint Joseph in the Cistercian Lilienfeld abbey in Lower Austria.

In the eastern side chapels a series of seven Sorrows of Saint Joseph is located. In the western chapels – seven Joys of the Saint.

Traditionally the figure of the innkeeper in the scene “Looking for accommodation” is shown as the crypto self-portrait of Michael L. Willmann (first chapel on the east from the presbytery).

Summer Pavilion on the Water

located in Betlejem about 2 km to the west of abbey in Krzeszów. Originally there was a solitude next to it. In the 19th century objects for tourist services were added next to it.
The wooden building was built in 1730 in the middle of the mineral water pond. Probably, originally it was acting as a bathing pavilion, but more probably it was connected from the start with the chapel of the Grotto of the Nativity.
The pavilion was built on an octagon plan and covered with pyramidal roof with a lantern. A wooden gallery, connected with the shore by a roofed bridge, runs around it. The interior is decorated with paintings made in 1731–1733 by Georg Wilhelm Neunhertz, which were probably planned by abbot Innocenty Fritsch. The bottom row presents old testament scenes connected with water. The middle one depicts King David and his soldiers while conquering Jerusalem and the war against Philistines. In the top part, on the lantern David’s leaders are depicted. In general the pavilion is to be interpreted as a symbol of Bethlehem – the city of David, where Jesus was born, but due to its shape it is also a symbol of a royal palace and a baptistery (connection with water) Triumphant King David appears as an announcement of the Messiah, who will establish the Triumphant Church.

Located in a picturesque scenery, the Calvary extends between the abbey and Betlejem village by the Cedron stream. It is the oldest and second biggest (after Wambierzyce) Calvary in Silesia. It was built as a copy of the Calvary in Jerusalem. It consists of 33 stations located in 23 chapels. It is an exact copy of the Via Dolorosa in Jerusalem, which consists of the Way of the Captivity (Via Captivitatis) and the Way of the Cross (Via Crucis). The most interesting chapels include „the Cenacle”, „Pilate’s town hall”, „Herod’s palace”, the chapel of St Mary Magdalene with the Holy Sepulchre, and „Jesus in the abyss” on the roof of the Mausoleum of the Piasts. The calvary in Krzeszów as a tourist route can be walked in two hours; with the prayers it lasts much longer.

END_OF_DOCUMENT_TOKEN_TO_BE_REPLACED

This site uses cookies. By continuing to browse the site you are agreeing to our use of cookies.I agree