Krzeszów Icon as Seen by a Theologian 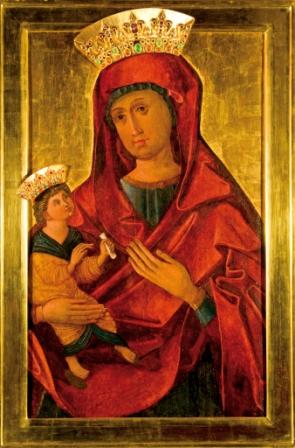 The devil fears Mary like holy water, as she is accompanied by hosts of angels fighting with evil. Therefore, the Krzeszów basilica, which is dedicated to the Assumption of the Blessed Virgin Mary, has angels everywhere. They adore Mary being raised to heaven in the central painting of the high altar, make music on the organ case, glance from the choir stalls, mural paintings and reliquaries, and accompany saints on the basilica’s facade. And these are also angels who brought the painting of Our Lady of Grace to Krzeszów. At least, this is what one legend says. And what was the truth? Historians spread out their hands helplessly and they indulge in speculations. The Krzeszów icon looks like out of this world. Scholars link it with Byzantine culture, where images were not just an act of artistic creation, but real images of God, God’s Mother or saints. They were made on knees and then worshipped, often so long that the worshipper had an impression that the image started talking to them. This is how a mystical relationship is established. The person who wants to grasp at least a particle of holiness inherent in the icon touches it with their head. They feel as if the eyes of the holy person meet theirs. The icon comprises a specific thought or a word. Hence, the word can be not only heard, but also seen. And it is the Word, as the Bible says, that was at the beginning. Let us look at the icon of Our Lady of Grace from Krzeszów. The central place in the icon, like in the image of Our Lady of Perpetual Help, is occupied by hands. Holding Jesus in them, Mary gives him support and a sense of security. She is pointing at him, while he is looking into the infinity, at God the Father. Thus, an icon of Mary gives hope of getting help when we are in need. Taking Mary from man is like taking hope away from him and leaving him in despair. Jesus had hope, so he bore the burden of the cross. He who will reason only in an earthly way, will achieve nothing, Mary says, pointing at her son. Her kind gaze is like absolution. However, this gift is available only to those who will know the truth, which is not of this world, but you can achieve this only on your knees – through prayer.