It was built by the Cistercians as a monument of the Catholic faith – it captivates the viewer with the subtlety of decorations and ornaments, impresses with its monumentality, and fills with admiration (the church, the mausoleum of the Piasts and the chapel of Saint Mary Magdalene are 118.15-metre long and the main body is 29.15-metre wide). It is the main shrine of the Legnica Diocese, a gem of European Baroque architecture and a vault storing such real treasures as the oldest panel painting of Virgin Mary (an icon) that can be found in Poland, a unique pipe organ that pleases the eye and the ear, the magnificent high altar with the altarpiece topped with a crown, first-class illusionist frescoes, and elaborately carved choir stalls.

Originally, it was to overshadow the churches constructed by the Protestants in Silesia. The title of Lesser Basilica was granted to it in 1998 by Pope John Paul II. A year before, the same Pope crowned the miraculous painting of Our Lady of Grace from the Krzeszów Basilica. The church was built in the place of the former Gothic church and its erection lasted seven years (1728-1735), which was a symbolic reference to the 7 years of construction of the most magnificent temple in Jerusalem – and Krzeszów, according to the Cistercians’ idea, was to become a New Jerusalem. The church was consecrated on July 3, 1735, but the work on its decoration was continued after that date – some elements of the decoration display Rococo features. The most outstanding artist were involved in the completion of the building (including such sculptors as F. M. Brokoff, A. Dorasil, G. Gode, and such painters as G. W. Neunhertz and F. A. Schefler). The church was built on a Latin cross plan with a transept and a chancel terminating with a semicircle, which was intended for the liturgy addressed to the public, while the side chapels were designated for private worship (concentration and contemplation) in accordance with the Counter-Reformation canon. 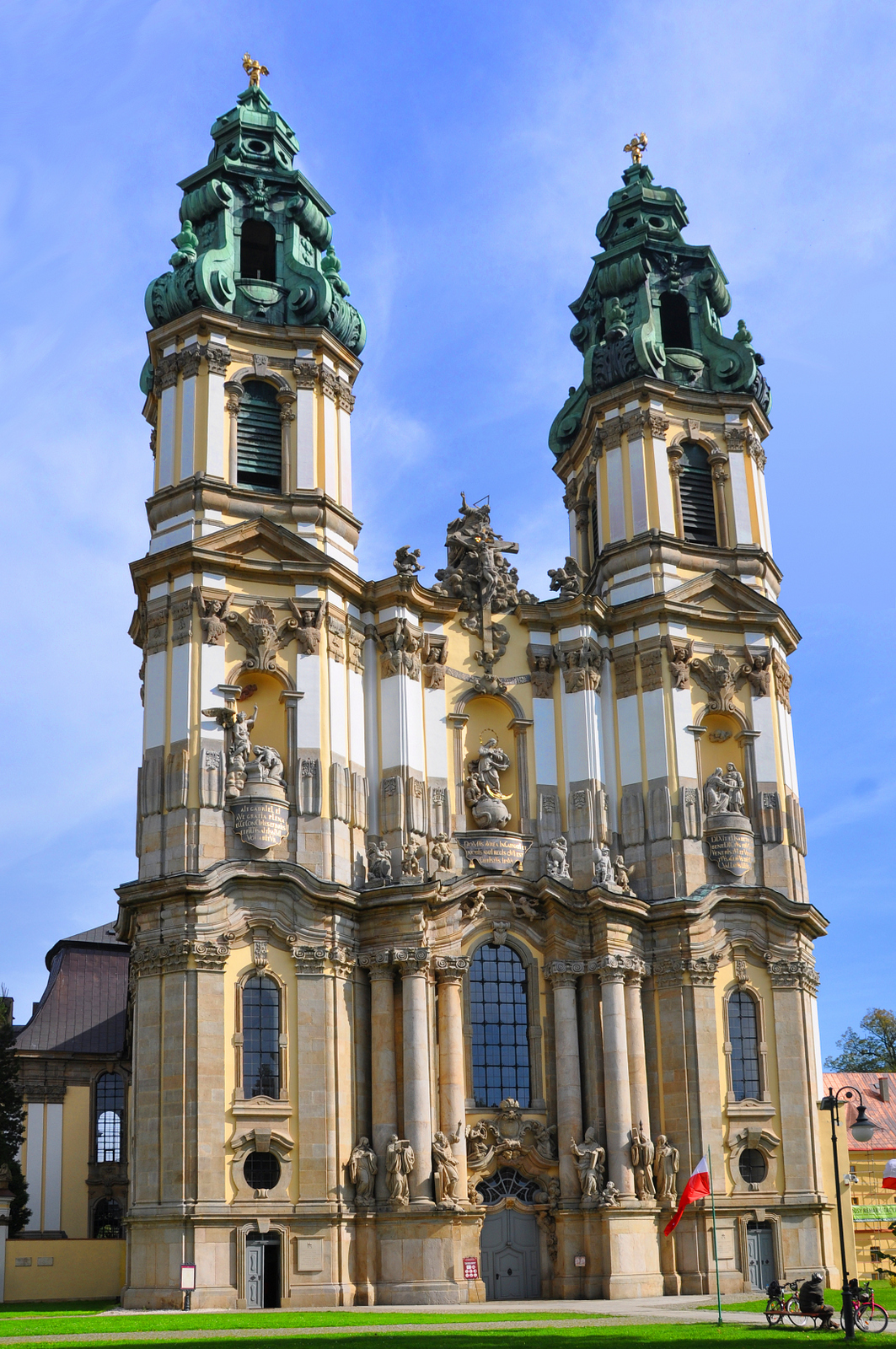 The west facade of the Basilica (the most decorated, with an entrance portal) is divided with undulating horizontal cornices into three parts. The lowest part symbolises the earthly life and it contains figures representing humankind, who receive divine grace. The second (middle) part, making reference to an ancient triumphal arch, represents fame and glory. It is due to Mary, the Saviour’s Mother, whose central figure is presented as Immaculata. She is flanked by two sculptures representing the Annunciation and the Visitation. The highest (divine) level shows the Holy Trinity. The figures of angels at the top level and below Mary are holding the attributes and shields with inscriptions defining the features of Immanuel, the Messianic boy from Isaiah’s prophecy. Tho Basilica’s tower (both 71.1 metre high) are covered with elaborated domes.