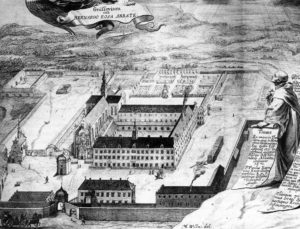 The beginnings of Krzeszów dates back to the half of the 13th century. In 1242 Anna, the Princess of Silesia and Poland, handed over a place in the forest of Grissobor to Benedictines from Opatowice. However, in 1289 the friars sold it to the Bolko I the Strict. In 1292 Bolko brought here the Cistercian Order and so they started building the gothic church. (…)

Krzeszów Abbey has been touched by many religious unrests.  Krzeszów was invaded in 1426 by Hussites, in 1622 by Lisowczycy, in 1632 by Saxon and Brandenburg armies, and in 1633 – by the Swedish army. The reconstruction of the Abbey was started after war. 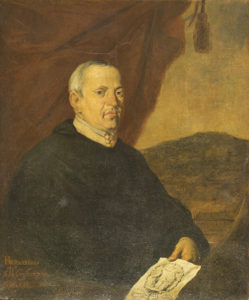 The year 1660 was the beginning of the Golden Age of Krzeszów, when Bernard Rosa was chosen to serve as the abbot of the Order. He begun the period of re-Catholicisation of the areas belonging to the Abbey where many chapels and churches were built. Dominik Geyer became the next abbot – he was a creator of the financial power of the Abbey. The new monastery temple was built  by his  successor, the abbot Innocenty Fritsch. Within just 7 years,  a new monumental Baroque  church was ready. The consecration of the new church was dedicated by bishop Filip Sinzendorf. The Consecration celebrations took place at the beginning of July 1735.